Despite not having to switch modes in my regular commute to work, with the introduction of new Opal fares this week, I thought I’d try to take advantage of the new multi-mode rebate to see if I can shave a few dollars off.

Previously, my work commute involved taking a bus from UNSW Kensington to Town Hall direct (typically, the M50). The distance between these two stops is roughly 5 km — which falls into the 3-8km fare band of $3.50. This single bus trip takes around 30 minutes assuming relatively smooth traffic which is rare nowadays thanks to the light rail construction in the Kensington area.

Instead, I thought I’d break up my trip into a lower fare band bus trip plus a new train trip. Choosing my bus routes carefully, I can see that the 370 bus can take me from UNSW to Green Square station in ~2.6km ($2.10 in fare terms). Changing to a train service from Green Square to Town Hall, I’m charged $2.36 off-peak. Subtract the $2 rebate, and I come out on top: $2.46 one way.

Now, the caveats.  Firstly, the 370 bus can be quite unreliable.  If the bus is on-time, the total journey time is basically the same (± 2 mins) albeit with a bit more walking.  However, buses which are 15 minutes late or don’t show up at all are not uncommon.

Secondly, the cheaper fares only apply for off-peak times.  In my case, applying peak-time train fares, the journey is only 2c cheaper.  That’s probably not worth the extra effort walking through Green Square and Central Stations and potentially missing connections.

So there you have it.  Even if you don’t normally switch modes, you might want to explore various multi-mode route options to see if you can save a few bucks or even save a few minutes in your daily commute.  You never know what you might find!

Note: For the purpose of this blog post, I’m assuming adult Opal fares even though I’m eligible for concession fares.  Fares and any savings would be halved when considering concession fares. 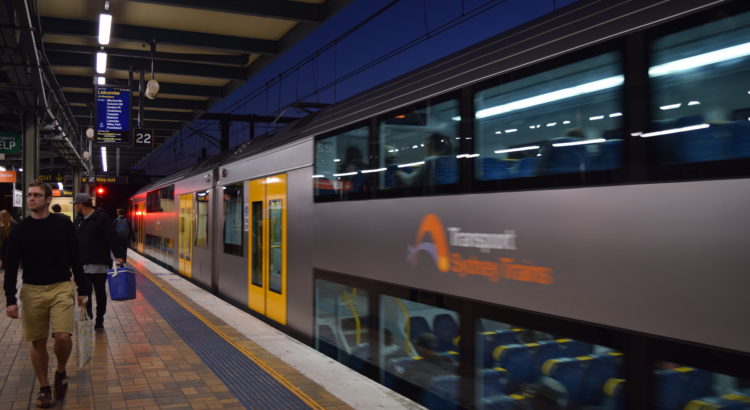 A few people have written in about the CBD Increment since my blog post went live this morning. As it turns out, this CBD increment is “well documented”… in a 107 page handbook known as the Sydney Trains and NSW Trains Fares and Ticketing Customer Handbook.

I’ve tried looking all afternoon, and cannot find a link from either the Opal website nor on any portion of the Transport for NSW website discussing Opal or fares generally. It is, however, linked to from the Terms and Conditions page about paper tickets.

For those curious, the direct link can be found here. The part you’re looking for is page 74.

Basically, any train trip that traverses through or starts and ends at a CBD station (Central, Town Hall, Wynyard, Circular Quay, Martin Place, Kings Cross, St. James and Museum Stations) will incur an extra 3.21km distance in their trip.

There is one extra caveat though. Regardless of which of the CBD stations you get off at, TfNSW will calculate the end of your trip to a “Gateway Location” based on which line you came from… before adding the extra 3.21km. Let me elaborate:

If you’re travelling from North Sydney to Newtown, you also have to add the increment.  You will be charged the distance fare from North Sydney to Wynyard (the Gateway Station for via Sydney Harbour Bridge) plus the extra 3.21km increment.  In addition, you will pay for Central (the Gateway Station for via Redfern Station) to Newtown.  Note, that the increment is only charged once. 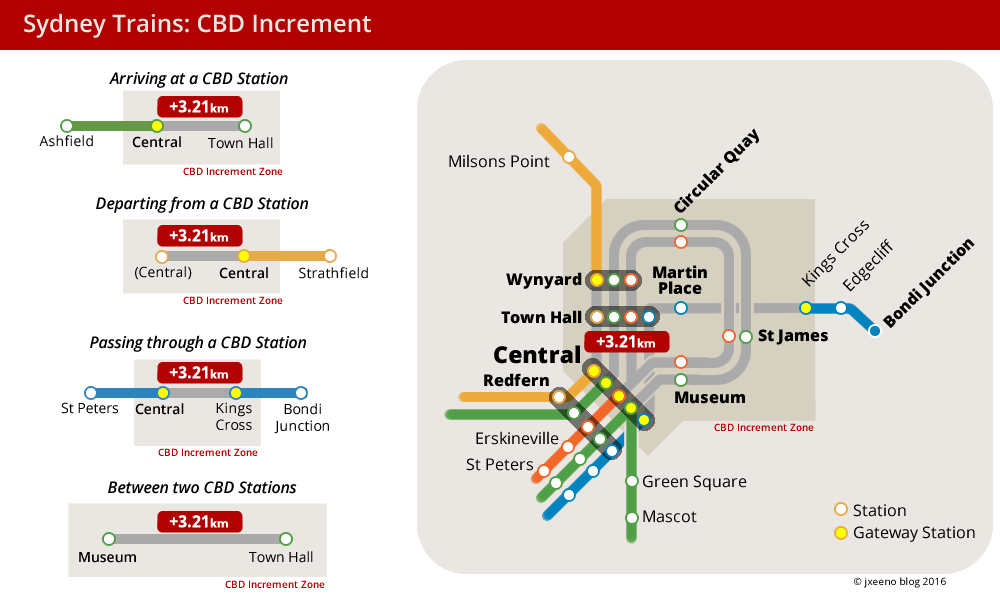 The idea behind the CBD increment is so that periodical tickets (e.g. weekly tickets) can be sold as a “city ticket” meaning passengers can get off any any of the CBD stations with the same ticket.

However, this doesn’t make sense for the Opal system where fares are advertised on a distance basis. It’s misleading and disingenuous to advertise that Opal train fares are based on “track distance” when in fact, it’s based on a psudo-distance hidden away in a 170 page handbook.

A suitable analogy, in my opinion, is a grocer selling apples and oranges at $3.99/kg. However, hidden away in a 107 page handbook, the grocer says that oranges incur an extra 1 kg increment that can be found the aisle that sells milk. Surely, this is considered misleading advertising.

Like the grocer, Opal advertises different fares based on track distance bands with no reference to this psudo-distance calculation. Like the grocer, it hides the CBD increment in a lengthy handbook stored in a part of the website that doesn’t talk about Opal fares. Does this mean that CBD Opal fares constitute as misleading advertising?

While I personally don’t mind to pay extra for travelling through the busy CBD area, I think Transport for NSW needs to be transparent about it.  Fiddling with the distance travelled certainly doesn’t look great. 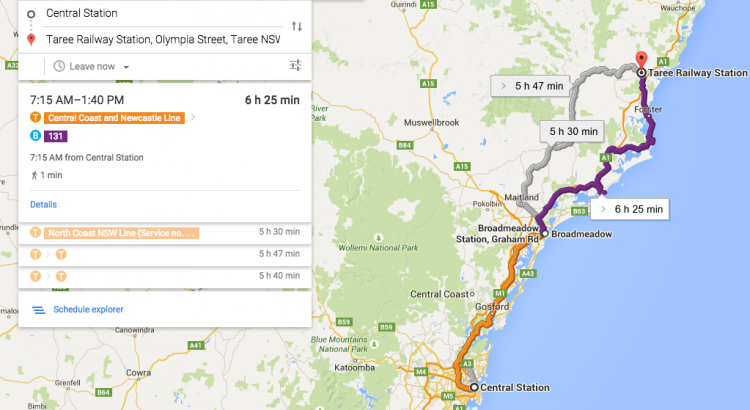 Now, you can plan connecting trips from Sydney Trains services and NSW TrainLink Intercity services all from one place.

Just a quick post.  Returning to Taree again this week, I notice the signage at the Taree Station has been upgraded from the original CountryLink livery to the bright orange colour scheme used by NSW TrainLink and Sydney Trains.

The upgrade must have happened in the last two weeks, as they were still using CountryLink livery two weeks ago on my return to Sydney.