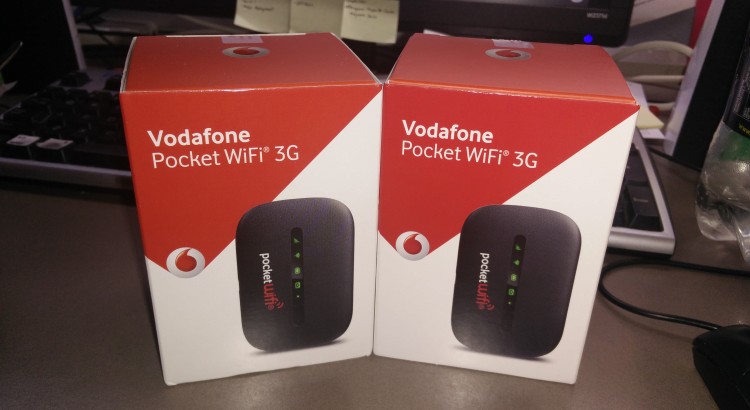 When you compare monthly mobile broadband plans with the starter kits you can get at your local supermarket or technology store, you would find an unfortunate truth.  Starter kits, often including a Wi-Fi 3G modem, are comparatively cheaper than your monthly access cost.

Compare that with the closest prepaid plan in terms of cost: the $40 Vodafone Mobile Broadband recharge — which will only give me 4.5GB over 40 days.

The 22GB offer Vodafone currently provides online is $200, albeit with an expiry of 365 days.  That’s a whopping 5x more expensive!

We haven’t even accounted for the cost of the Wi-Fi modem that comes with the starter pack.  A Huawei-made Vodafone Pocket WiFi R207.

This is perhaps one of the most extreme cost differential examples — however, this same phenomenon is replicated across all major carriers.  Telstra and Optus both have the same tactic of selling mobile broadband dongles for below-cost and bundled with a generous one-off data bonus.  Sounds awfully like a printer company, am I right?

The business model that the major carriers are using promotes the mass purchase of SIM cards and mobile broadband devices.  What’s the problem?

Secondly, it’s an account management nightmare.  Each new SIM would need a new account login on the mobile carrier’s website to check and keep track of data usage.  It would be a pain to have to change this every month.  Also, Australian’s are expected to declare how many phone services they have active under their name — this could be massive if we end up buying new SIMs every month.

Lastly, we have the same environmental issues as printers — we’ll end up with far more mobile Wi-Fi modems that we’d possibly need.  Personally, I’m currently in posession of 5 mobile broadband modems while I’ve been taking advantage of these deals — three Telstra modems and two Vodafones.  Most of these — I don’t use and to be honest, I’d be happy to give away.  It just goes to show how much waste there is in electronics these days.

Yes. I also bought a printer. Harvey Norman was also selling a multi-function inkjet printer for $17 that I couldn’t resist but buy.

The printer even has clicky buttons, an LCD screen, fax functionality and a document-feeder scanner.

I’m yet to use any of its ink, I bought it purely for its document-feeder scanner to move towards a paper-less environment.  I think I have broken their business model.

Did we miss an opportunity to get an FTTP+HFC rollout? Figures from NBN’s stragegic review suggest a two-stage FTTN to G.Fast upgrade could now cost more than if we just stuck with FTTP

Even before they’ve switched on a single Fibre to the Node customer — nbn, the company responsible for building the National Broadband Network, has been busy spruiking their plans to trial and eventually upgrade Fibre to the Node to G.Fast technology to the media.

Fibre to the Node: blowouts

The company had straight-out refused to publish a raw Fibre to the Node cost-per-premises figure in their Strategic Review. However, on page 101 of the Strategic Review, the company estimated that it will cost around $2 billion dollars to roll out 3.6 million premises using Fibre to the Node architecture.  This equates to approximately $555 — $833 per premises (assuming range of $2 — $3 billion dollars divided by 3.6 million premises).

According to the latest 2016 corporate plan, this cost has blown out to $1,600 per premises or a net increase of $767 — $1,045 per premises (excluding infrastructure lease which was not attributed to CPP in original calculations).

nbn has also increased the FTTN/B/dp footprint from 3.6 million premises to 4.5 million.  From Fibre to the Node cost per premises alone, this has attributed to a net blowout of between $3.5 to $4.7 billion dollars from Strategic Review cost estimates — potentially overriding the savings of $2 billion envisaged in the VDSL–G.Fast upgrade path.

Fibre to the Premises: better than expected?

The issue with this is of course, comparing FTTN costs with costs that we’d never know.  We will never know exactly how much a “radically redesigned” FTTP rollout would have costed — but we can make estimates:

But it’s too late anyway

But unfortunately, the company has already invested billions into developing the so-called Multi-Technology Mix and has a task to rollout Fibre to the Node thanks much to Government policy.  These are costs that taxpayers will never be able to recover, meaning we may have missed another opportunity to rollout FTTP in the majority of the now-FTTN footprint.

As the cost of the copper-based network increases, the comparative investment in those technologies become less attractive.  Speed and capacity upgrades require installing more active equipment in the field and also extending fibre closer to the home. Thus, incremental upgrades and ongoing operating expenses on a copper-based broadband network is far greater than those on a fibre-based network where only tail equipment has to be swapped out.

If the savings in building a copper-based network are relatively small in initial capital expenditure — eventually, the economics will reverse and bite back.

Since Fibre to the Node will now span the majority of the network, the only logical upgrade path for those areas would now be FTTdp because of all the capital costs sunken into rolling out FTTN.  But don’t think for a second that it will be actually cheaper than rolling out fibre all the way to the home in the first place.

In summary, if the Strategic Review’s figures are to be trusted, we may have missed yet another opportunity to get a FTTP network, albeit “radically redesigned” in nbn‘s vernacular.  Calculations suggest it could have cost less than what the current FTTN rollout plus a G.Fast upgrade in 2020 will cost.  Plus, the company has also proved at almost every instant that they had underestimated any non-FTTP costs in the strategic review and helpfully inflated any FTTP costs higher than actuals.

What are your thoughts?  The analysis, of course, makes assumptions based on the available data.  I think it’s a real pity how it seems time after time, taxpayer’s money ends up being wasted based on a false premise in a rushed report.

Service provider feedback forces NBN to waive new charges to be introduced with the launch of the Fibre to the Node product.

Citing concerns by some service providers, the company responsible for building the National Broadband Network has decided to temporarily waive or cap a number of new charges “minimum period of 12 months” that were originally scheduled to be introduced with Fibre to the Node installations.

Amongst the charges changed is the “professional installation” charge for Fibre to the Node and Basement areas, where a technician installs a central filter at the premises to reduce copper line interference.

Initially, nbn had wanted to charge service providers and in turn, end users, a variable cost depending on the number of hours the installer took to complete the installation.  The filter installation during the initial order would have had a base cost of $160 and the company would charge a further $75/hour for every hour beyond two hours plus any additional material costs.  Filter installations requested after the initial standard installation would have cost at least $235, plus every hour beyond three hours.

nbn says that some service providers “expressed concern that the basis on which NBN Co is going to charge for Professional Splitter Installations (i.e. on a time and material basis) would make it difficult for them to establish fixed prices for their retail offers.”  The company has now introduced capped pricing at $160 and $235 respectively, and will not charge for additional hours incurred or extra materials used in the installation.

In addition to the changes to the filter installation, nbn has waived its right to charge service providers a number of other ancillary charges.  A number of service modification have been waived entirely such as equipment removal, modifications and repair.  These were originally charged at $75/hr for a minimum of 3 hours.  Service management charges for missed appointments, late cancellations, incorrect technician callouts and so-called “no fault found” callouts have also been waived for the FTTN and FTTB network.