Following a map update yesterday, NBN Co has removed approximately 58 thousand premises that were previously slated for a Fibre to the Premises rollout from its rollout map.

These premises, spread across 22 Serving Area Modules (SAMs) in NSW, VIC, QLD, SA and WA, were all in the Build Preparation phase where Telstra’s pit and pipe remediation works commences and detailed designs of the SAM being finalised with NBN Co’s construction partners.

The majority of these SAMs are covered by Telstra’s or Optus’ HFC networks, which NBN Co is expected to acquire, upgrade and integrate into the National Broadband Network as part of their so-called “Multi-Technology Mix” rollout strategy. It is expected that most of these areas will now be delayed until the HFC deals are finalised and rollout commences.

However, there are also some areas such as Dubbo (2DBB-06) that are not covered by the HFC networks but were still removed from the map.

Update 15/04/15: According to Daily Liberal, 2DBB-06 was delayed due to an “over ambitious” rollout sequencing by NBN Co.

Opinion: the good, and the bad

(opinion) It’s not the first time that NBN Co has removed areas from the rollout map, and it won’t be the last. But it’s another significant reduction of premises covered by the Fibre network.

The good news is that NBN Co is deciding to make better use of tax payers money in achieving its expectations (as outlined in the Statement of Expectations, which only requires min. 25 mbps, remember!). Once DOCSIS 3.1 is rolled out, the HFC network upgrade will be vastly better than current HFC services and indeed — should be able to deliver speeds comparable to the current FTTP network.

The sad news is that you won’t get fibre (but it’s okay!) and you probably won’t get faster internet for some time yet… at least until the HFC deal is finalised and the upgrades are done.

It is disappointing to see NBN Co add these areas, knowing the HFC deal was ahead, then backtrack and remove these areas silently. No doubt, there will be many disappointed people around Australia that their beloved fibre connections will no longer come to them.

I believe that, as hard as it may be, NBN Co has a role in informing these communities that they were removed from the map for a reason and not to fear. To have them on as “build preparation has commenced”, then suddenly remove them because of a change in policy that was known months in advanced will only cause confusion and angst in the community.

END_OF_DOCUMENT_TOKEN_TO_BE_REPLACED 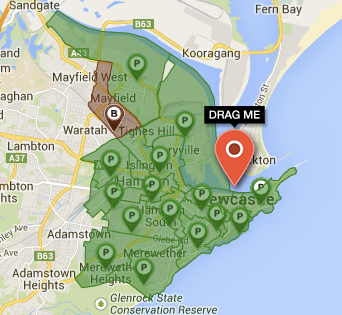 A few minutes after midnight, on a dark and cold Monday morning — NBN Co released their latest update to the NBN rollout map showing areas that are part of the Fibre to the Node deployment trial. This was a long awaited update — speculated for a whole week before the map update. A full list of CSAMs can be found at the end of this post.

However, one of the striking issues when you first look at the map is… there’s no way to distinguish between an FTTN and an FTTP area. The following screenshot of the rollout map shows both an FTTP and FTTN rollout. The area labeled “B” is in build phase, and happens to be FTTP… but can you distinguish which technology is used in the other “P” sites?

Hopefully, NBN Co will eventually fix it up and let us know which technology is being rolled out in which areas 🙂

END_OF_DOCUMENT_TOKEN_TO_BE_REPLACED 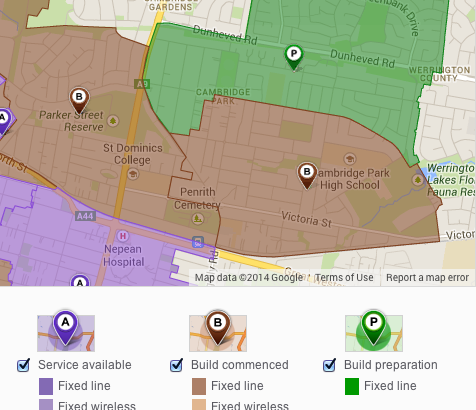 In a website update late Wednesday night, NBN Co has added FSAMs (Fibre Serving Area Modules) that are undergoing Telstra remediation to their rollout map — marking them as having commenced “Build preparation”. A full list of FSAMs added to the remediation stage can be found at the end of this post.

In a typical NBN Co brownfields fibre-to-the-premies (FTTP) rollout, NBN Co releases areas for Telstra to replace pits and ducts (remediation) before sending their own construction partners into the area to build and rollout the fibre.

NBN Co has previously indicated that it was their intention to improve the rollout map to make it more relevant and accurate to end users. This addition comes after NBN Co removed around two-thirds of the areas listed as “Construction commenced” after the change in Government, replacing it instead with a build commenced metric. This new “Build preparation” provide more clarity to Australians who may have previously witnessed “NBN work” in their area yet the NBN Co rollout map had not been updated to reflect that.

NBN Co also recently changed their premises passed metric in an attempt to make it more relevant and accurate to consumers and retail service providers.

(NBS) denotes an FSAM “never before seen” on the construction maps. i.e. not part of those that were removed from the Construction Commenced map in Nov 2013.