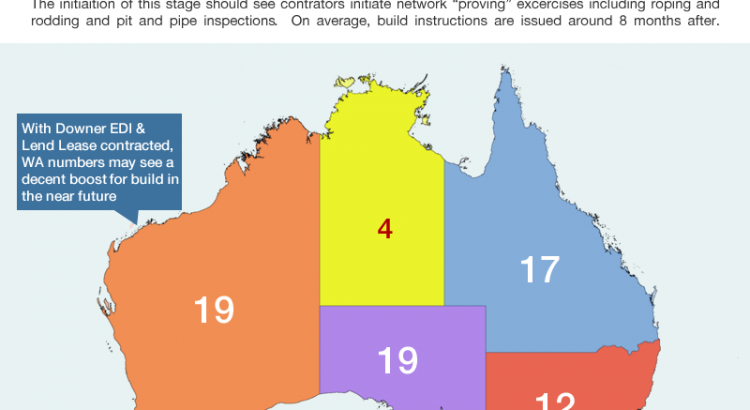 In response to a recent Freedom of Information request, NBN Co reveals that an additional 81 FSAMs were added to the “pipeline” between the start of September 2013 till the end of March 2014 to begin the detailed design phase of the network.

The “detailed design” phase was previously marked with “Construction Commenced” on the NBN Co map. It indicates the first contract instruction issued to NBN Co’s delivery partners to commence the detailed design and conduct network proving exercises including roping and rodding and preliminary clearing of ducts using “vac-trucks”.

These FSAMs are in addition to the areas previously classed as “Construction Commenced” on the NBN Co rollout map prior to the election and may have come from the old 1 year rollout plan.

All states and territories in mainland Australia receives at least one of these contract instructions, but Tasmania misses out, due to the unresolved contract disputes with Visionstream. However, it is great to see that 19 FSAMs were issued in Western Australia and South Australia each, adding to the backlog of FSAMs that never passed design phase under Syntheo’s contracts.

Following on from this detailed design phase, once the final design is approved and handed back to NBN Co, they will issue remediation notices to Telstra to fix any pits and ducts that may need to be replaced. NBN Co then issues build instructions to their delivery partners to begin network construction. It is uncertain at this stage how long NBN Co anticipates the detailed design phase will take.

The precise location of these new FSAMs is also not yet known.

Q: Are these FSAMs the same ones as those that were removed from the NBN Co rollout map?
A: No. These FSAMs are in addition to the “orange” shades removed after the election. It is highly probable that these areas came from the 1 year rollout map. Those areas previously shaded in orange and since removed should see build commence in due course, where NBN Co has determined it is “economically viable” to build in that area.

Q: Do we know the actual location / FSAM identifier?
A: No. That was not part of the scope of the FOI request. Requesting specific information like that would have resulted in high processing charges for the request.

Q: How long does it take for this batch of FSAM to reach build stage?
A: NBN Co has redacted average statistics for the design phase in the Strategic Review. At this point in time, this figure is uncertain.

Feel free to ask any questions in the comments. I’ll try and answer and collate here.