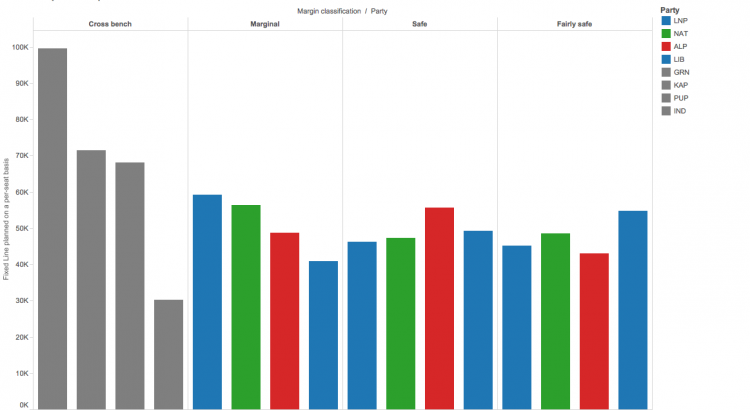 Rollout numbers are higher in the densely populated areas held by cross-bench and marginal LNP MPs.

Writer’s note, 20th Oct: A point of clarification. While the data does show on an averaged party-margin basis that seats of a few cross-bench MPs have a higher number of homes in the 3 year plan, this does not suggest a direct correlation between the two. As stated previously in the article, albeit possibly not clearly enough, the seats held by the Greens, KAP and PUP are generally more densely populated and thus, would tend to have higher rollout figures in the fixed-line 3 year plan.

Analysis of the nbn construction plan released last week shows that on an averaged per-electorate basis, seats held by cross-bench MPs Adam Bandt (Greens), Bob Katter (Katter Australian Party), Clive Palmer (Palmer United Party) and conservative LNP seats has the greatest number of premises scheduled to commence construction over the next 3 years. However, the majority of these seats are coincidentally located in the more densely populated areas of Australia.

By party margin on a per-electorate basis

On a per-electorate basis (that is, the total number of premises divided by the number of seats held), marginal Liberal-National Party and Nationals Party seats come in at fourth and fifth with 59,233 and 56,300 premises expected to enter build respectively.

* the total number of premises in the plan to commence build (column 3), divided by the number of seats held within the party-margin category (column 4)

However, the winning electorate is the electorate of Sydney – currently held by Labor MP Tanya Plibersek – with a total of 106,800 premises slated to commence build by late 2018.  This is followed closely by Adam Bandt’s seat of Melbourne (99,600), Labor MP Melissa Parke’s marginal seat of Fremantle (94,700) and Labor MP Clare O’Neil’s seat of Hothan (92,000).  The high number of premises in these areas is reflective of the dense population of these inner metropolitan centres.

Of the 150 federal electorates, only the electorate of Solomon – held by Country Liberal MP Natasha Griggs – has no fixed-line rollout plans.  The electorate covers the greater Darwin area where NBN rollout is mostly completed or already underway.